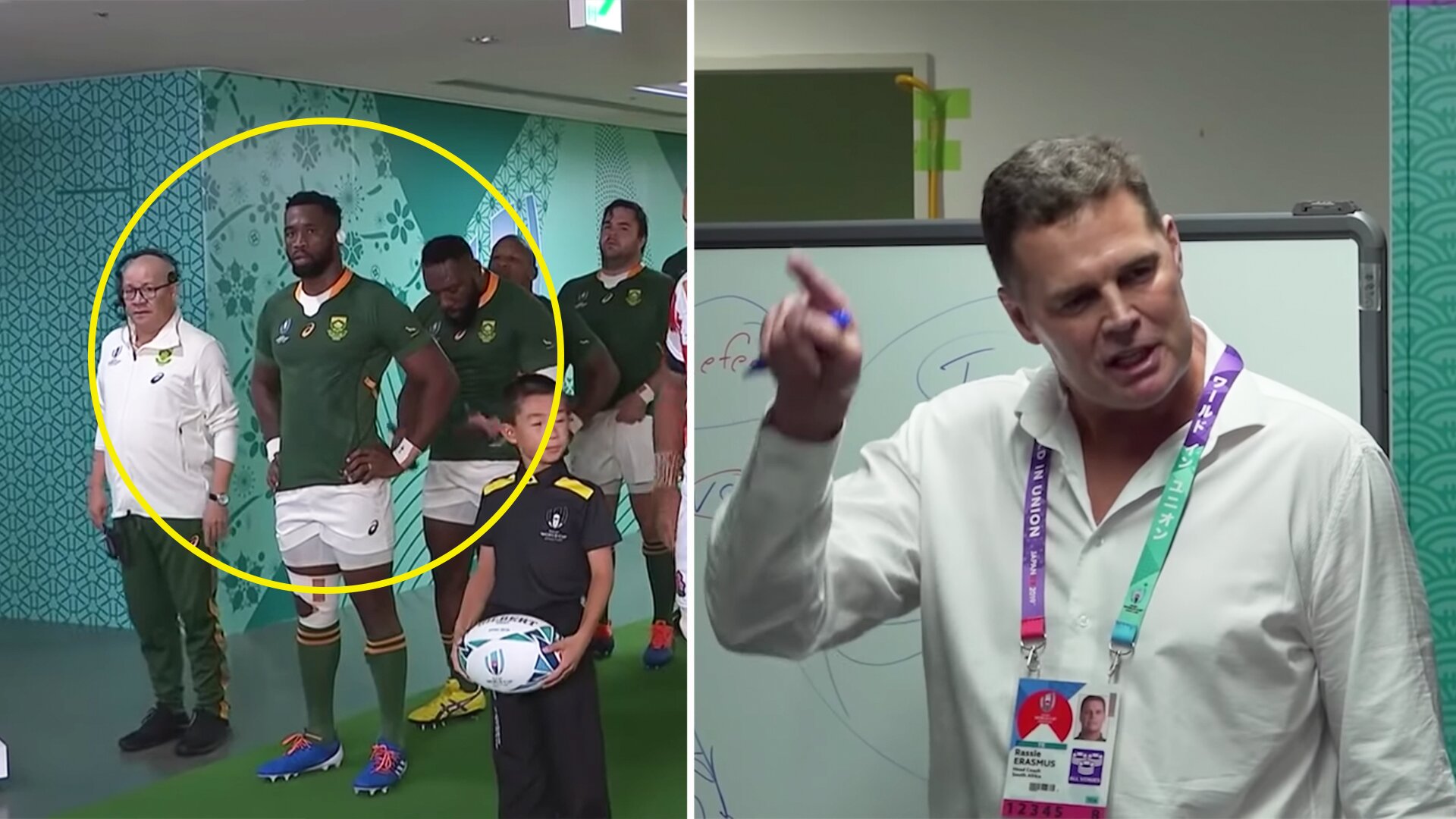 ‘Siya, don’t smile at him – let him know you’re here to **** him up’ – Erasmus’s brutality shown in chilling new CTS episode

The latest episode of the ‘Chasing the Sun’ series gave us a chilling interaction between Rassie Erasmus and his captain Siya Kolisi.

The new footage from the most recent ‘Chasing the Sun’ episode covered the Springbok’s crunch showdown with tournament hosts, Japan. Supersport have released the full, uncut, pre-match team talk that the head coach delivered to his side on the day of the crunch quarter-final.

This is is about as raw as it gets in test match rugby.

Erasmus doesn’t mince his words as he calls out and says,

Later on he goes on to compare what the match means to Japan against what it means to South Africa,

That’s their motivation, they’ve 120,000,000m people, they’re one of the richest countries in the world – and it’s p***ing me off that they think that gives them the right and that we must sit back.’

Erasmus then turned to his captain, Siya Kolisi and gave him strict instructions on how to deal with the Japanese captain during the pre-match coin toss. Watch the brutal new video below.

France tighthead Mohamed Haouas is set to appear before a criminal court for questioning just eight days before the start of Les Bleus 2021 Six Nations campaign. A Montpellier public prosecutor’s department said Haouas will be questioned regarding an alleged robbery of a tobacconist six years ago.

The 26-year-old previously spent four days in custody for his suspected involvement in the 2014 incident.

According to reports in France, Haouas’ hearing has been set for January 29, with France due to kick-off their 2021 Six Nations campaign against Italy in Rome on February 6.

The Montpellier prop, who made his international Test debut against England this year, has faced a number of disciplinary issues this season.

In March he was handed a three-week ban for punching Jamie Ritchie during France’s 28-17 Six Nations defeat to Scotland.

Haouas then missed the opening game of the Top 14 season and lost his financial bonus after arriving late to training and having an altercation with a club sponsor.

Despite these controversies, he is expected to be involved when France host Ireland in their final game of the 2020 Six Nations in Paris on Saturday.

“Mohamed’s journey has been tortuous at times. I believe he can still give a lot to the team,” Ibanez said.

“He’s a very endearing player who deserves special attention with what’s at stake for him and us. We’re very careful when it comes to managing him.”